Code is prone to errors. You will quite likely make errors… Oh, what am I talking about? You are absolutely going to make errors, at least if you’re a human, not a robot.

But in the browser, users don’t see errors by default. So, if something goes wrong in the script, we won’t see what’s broken and can’t fix it.

To see errors and get a lot of other useful information about scripts, “developer tools” have been embedded in browsers.

Developer tools are potent, they have many features. To start, we’ll learn how to open them, look at errors, and run JavaScript commands.

There’s an error in the JavaScript code on it. It’s hidden from a regular visitor’s eyes, so let’s open developer tools to see it.

The developer tools will open on the Console tab by default.

The exact look of developer tools depends on your version of Chrome. It changes from time to time but should be similar.

Now we can see errors, and that’s enough for a start. We’ll come back to developer tools later and cover debugging more in-depth in the chapter Debugging in Chrome.

Multi-line input
Usually, when we put a line of code into the console, and then press Enter, it executes.

To insert multiple lines, press Shift+Enter. This way one can enter long fragments of JavaScript code.

Firefox, Edge, and others
Most other browsers use F12 to open developer tools.

The look & feel of them is quite similar. Once you know how to use one of these tools (you can start with Chrome), you can easily switch to another.

Safari (Mac browser, not supported by Windows/Linux) is a little bit special here. We need to enable the “Develop menu” first.

Open Preferences and go to the “Advanced” pane. There’s a checkbox at the bottom: 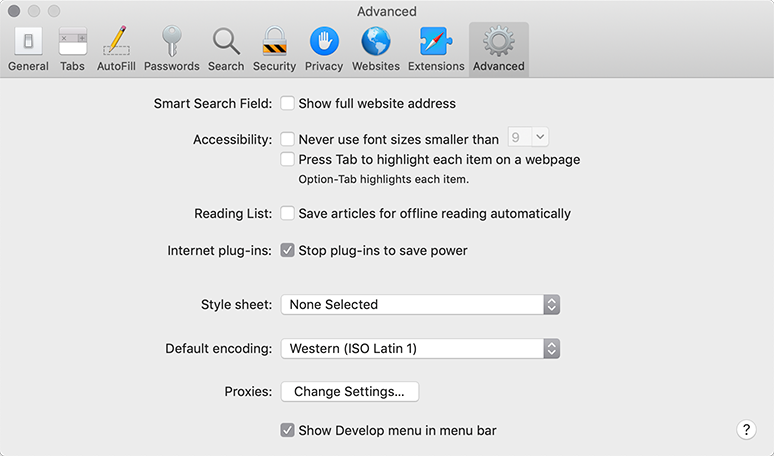 Now Cmd+Opt+C can toggle the console. Also, note that the new top menu item named “Develop” has appeared. It has many commands and options.