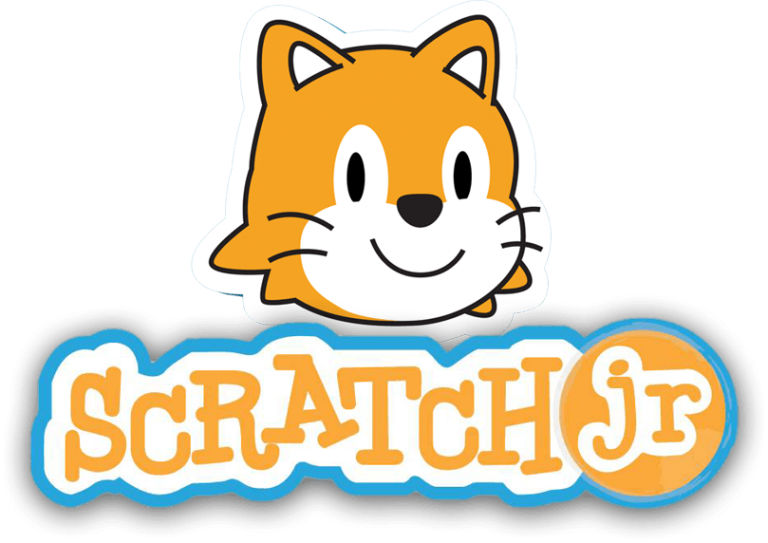 What is ScratchJr?
ScratchJr is an introductory programming language that encourages creativity and expression, enabling five- to seven-year-old children to create their own interactive projects through coding.

Using ScratchJr students can combine “blocks” to make their characters come to life, add interesting backgrounds and much more.

Welcome to ScratchJr! The projects that  you can make with ScratchJr are limited only by your imagination. If you can dream it, you can make it.

Throw a Dance Party
The ScratchJr Cat and a friend need to dance on the stage. Let’s help them out. 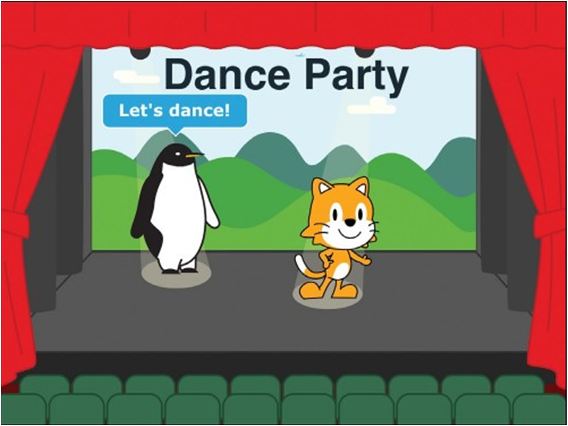 This Project will teach learners how to use ScratchJr 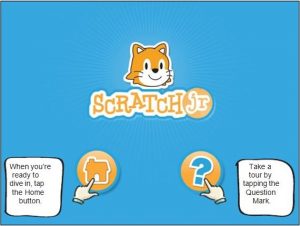 Step 3: Home Screen:
Here, you can create a new project. It also shows all of your saved ScratchJr projects. 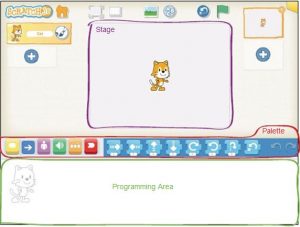 Each new project starts with the Scratch Cat.

The center of the screen where the cat is standing is called the stage area.

To make the cat move we need to use the motion blocks. Use your finger to drag one of the blue arrow blocks to the programming area

Tap the blue block, and the cat moves in the direction of the arrow!

Drag more blocks to the programming area and snap them together to create a sequence of actions, which is called a script.

5.1
Try to add some motion blocks together to make the cat move.

Give an option to upload the code onto our website.
Note: The script runs from the beginning no matter which block you tap, and each block is highlighted as it runs.

Congratulations you have made your first program. Share this link with friends to show them all about what you have done.

Tap the yellow button in the block categories area to show the triggering blocks.
Select the Start on Green Flag block,
Pull it to the programming area, and snap it onto the front of your script. 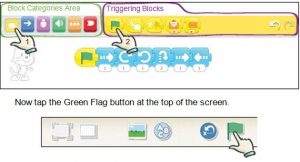 Hooray! The Cat just danced for you!

The Cat is dancing but he is unhappy, He wants to dance on a stage.
Select a new background by tapping on the button with the blue sky and green grass at the top of the main screen.

This is called the Change Background button.

Insert a picture of the button
From all the options available, choose the theatre for our dancing cat. 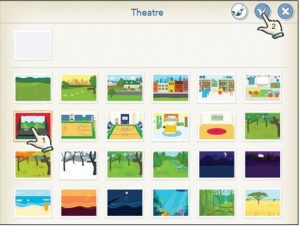 AND A STAR IS BORN!! 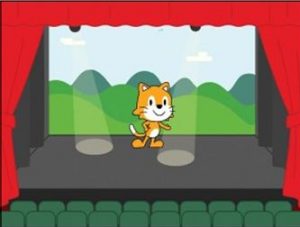 Our Cat is feeling a bit lonely on stage. Dancing is always better with friends.

STEP 6: Let’s include a friend for our cat.

Tap the plus sign on the left side of your screen to add a character. 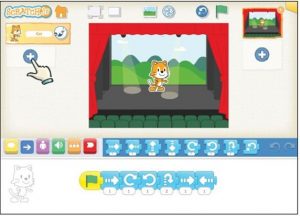 There are many characters to choose from.  Tap the character you want to add, and then tap the checkmark to add it to your project. 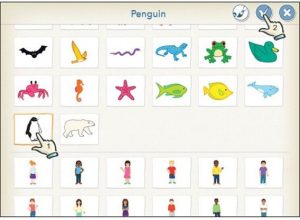 The new character will always appear in the middle of the stage. To move the character, use your finger to drag it wherever you want on the stage.

We’ve placed him under the spotlight 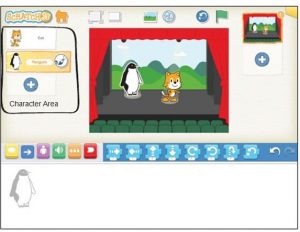 The Script for our cat seems to have vanished!
Don’t worry, the script is still there! It’s in the cat’s programming area, and now the screen is showing the programming area for the penguin.
Each character has its own script, like film actors.
Click on the cat to see its script.
Now click on the penguin

STEP 7: Our Penguin wants to say something before he dances.

You can add speech bubbles for characters using the purple Say block.
Tap the purple button in the block categories area to reveal the looks block 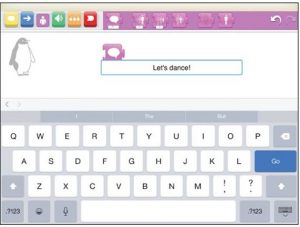 Exercise 5.3
Let’s change the text of the Say block from

First, tap the word hi to make the keyboard appear. Use the backspace key to delete hi

Now add whatever you want the penguin to say.

Now add some blue motion blocks after the say block.

Notice that both the cat script and the penguin script are runned.

Note: When you tap the Green Flag button, it will run every script that begins with a Start on Green Flag block for every character, all at the same time.

) at the top of the screen. In the window that pops up, type Dance Party.

Note: You can place the title anywhere on the screen by dragging it

You can also use the Change Size (

) buttons to change the size and color of the title you give your project.

To edit the title again tap on the words.
Put Title image here 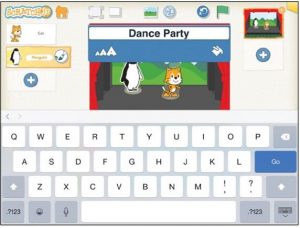 To name your project, tap the yellow tab in the top-right corner of the screen. Then delete the current project name (Project 1) and type Dance Party. When you’re ready to return to the main screen, tap the checkmark. 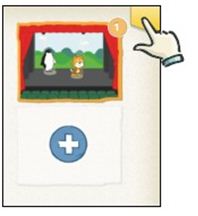 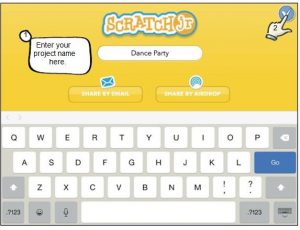 STEP 10: Save The Project

To save your project and go back to the home screen, tap the Home button (

) in the top-left corner

Note: Your project will not be saved until you return to the home screen,(Keep doing this and saving the project a few times)

To continue working on the project tap the small image of the project on the home screen.

Note: The ScratchJr characters are all either facing forward or facing right when you first add them to your stage. If you want a character to face to the left, drag a Move Left block to the programming area and tap the block.

ScratchJr makes different sounds when you perform different actions on the interface. The sounds help children make associations with different actions.
Eg: when you have successfully snapped blocks together in a script, you’ll hear a “pop.”
If you want to turn the sounds off, however, you can just turn the volume off on your device.

Try out these functions for yourself:

Deleting Blocks:
Drag the blocks back up to the blocks palette and let go.
The palette doesn’t have to be the same color as the blocks you are deleting.

Previous Topic
Back to Lesson
Login
Accessing this course requires a login. Please enter your credentials below!
Lost Your Password?